Congratulations All Past Winners! See you in Clanton, AL in 2023 for the 10th Annual Southern Heritage Hunt & Show! $4,000 Added on Hunt!

AKC Bench Shows function where the exhibiting of the dogs are done on the bench and they are judged according to how well they meet the breed standard as written by the particular parent club for that breed. Breed standards are written and maintained by the parent clubs not AKC. If a standard needs to be be revised, etc. the parent club must request it. Most judges today will also examine the dog on the ground and will request a down and back. There are three show titles that can be earned; CCH-Champion, CGCH-Grand Champion, CSG-Supreme Grand Champion.  Dogs that have not earned a title are considered “open” and should be entered in the open classes according to breed and age. Dogs which have already earned their CCH can proceed to the “champion” classes beginning with Grand. Unlike conformation events entries for shows are taken the day of just prior to the show. The deadline time advertised is the time to get your entry in by. Shows are advertised in American Cooner and in our online events calendar. Clubs hosting coonhound bench shows are not required to list information about the bench show in their premium lists or catalogs however they can if they wish. Dogs must be at least 6 months old and have an AKC registration number or have applied for an AKC registration number at the show.

At the completion of the show  1 BIS Male and 1 BIS Female will be selected.  The regulations state that in order to win a CCH a dog must earn 100 pts and 1 BIS win “with competition”.  *Competition as of June 1, 2014 is defined as having to go against another dog in any of the previous rounds (at any level) during the open show.

*Note: This change to the clarification of Chapter 6, Section 4 of the Regulations for AKC Coonhound Bench Shows, Field Trials, Nite Hunts and Water Races was put in place after careful consideration and lengthy review process. This was not changed due to anyone or any club’s single request. In the final analysis this change was voted for as it keeps consist with the principal in which a title is earned across all three bench show titles.

HOW POINTS ARE COUNTED AT REGULAR SHOWS:

HOW POINTS ARE COUNTED AT MAJOR SHOWS:

The top 3 dogs in each breed according to the bench show rankings will receive recognition at the following year’s World Bench Show.

World Bench Show date, location and judging will always be posted to the home page with the World Hunt info once plans are finalized. Entries open at 9:00AM and close at 11:00AM $40 entry fee, show to follow approximately 11:30AM. There will be no pre-qualifying and an awards ceremony will take place to honor the previous year’s breed race winners. The World Show will have open dogs competing first then advancing to compete with Champion class dogs for BOB male and female. They will then compete for Best World Champion either a male or female. These final 7 will compete for Overall Show & Reserve. See World Show Format chart. 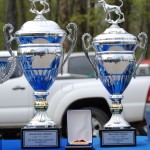